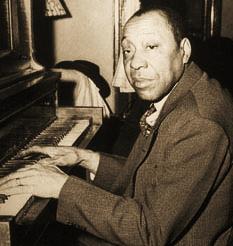 Jimmy Yancey played an important role in the history of blues and boogie woogie. Born in Chicago, he started playing the piano rather late and developed his own way of playing the blues. Unwillingly, he became an influential figure in the Chicago musical life: his playing was a major source of inspiration for Meade Lux Lewis and Albert Ammons. However, Jimmy Yancey chose the job security to the artist's life and worked for 25 years as a gardener at the Comiskey Park. But in 1939, recording studios became interested in his music and from 1939 to 1940, he was invited to cut a number of piano solos: sometimes ingenious, sometimes unpredictable. He particularly liked to finish each track with a short coda, still the same, a E flat, and whatever the tone he was playing.