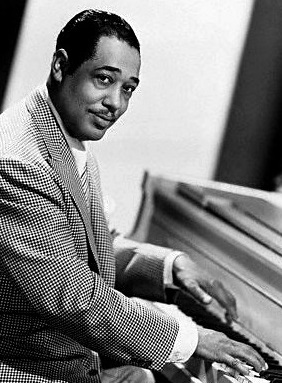 Edward Ellington was born in Washington D.C. in a middle-class family. He hesitated for a long time between his two passions, music and baseball, before choosing a pianist career at the age of 17. He formed his own orchestra in 1923 called The Washingtonians. Becoming more and more popular, the band was hired in 1927 at the Cotton Club which was the most popular nightclub in New-York City. The 30’s has been marked by numerous tours by the band in the USA and in Europe, and exploration of new sonorities. In 1938, Duke hired a new pianist in his orchestra, Billy Strayhorn who became his musical alter ego. With the arrival of new soloists (Ben Webster, Ray Nance...) the 1940 decade marked an important esthetical watershed. This period is known to be the golden age of the Duke Ellington’s orchestra.

During the years, Duke Ellington established as a major figure of jazz, exploiting a whole range of sonorities in his orchestra, mixing blues elements, swing rhythms, African music as well as contemporary classical music. Rarely in the foreground as a soloist, Ellington had a solid piano technique, easily recognizable by his refined style and his original harmonies.